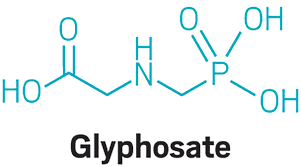 In one year alone, up to 287 million pounds of glyphosate herbicides have been sprayed on crops in our country. The USDA allows up to 400ppm of this chemical compound in finished livestock feed—that’s more ppm than zinc, copper, cobalt, manganese, and selenium combined in most horse feeds. What impact does this have on the health of your horse? Let’s take a look.

There are still many unknowns about glyphosate. Some scientists are suggesting that glyphosate could be an analogue for glycine. Since it is a synthetic amino acid, it could replace glycine in the process of making collagen. Collagen is the main component of all connective tissues in your horse’s body. No glycine, no collagen, no horse.

As weeds have become more resistant to glyphosate, farmers have resorted to herbicide cocktails that combine glyphosate with other compounds like 2-4-D, dicamba, and glufosinate. The effect of these cocktails on your horse is unknown. Glyphosate-containing ingredients in your horse’s feed can include corn, soy, alfalfa, beet pulp, molasses, and distiller’s grains. Some ingredient grains are also sprayed directly with glyphosate as a desiccate for harvest; these can include oats, wheat, barley, peas, and sunflowers.

When you choose organic horse feed, you are saying no to glyphosate and choosing better gut health and nutrient bioavailability for your horse. New Country Organics horse feeds are free from antibiotics, harmful pesticides, and GMOs.